I'm combining days twenty eight and twenty nine of the August Opera Challenge, as both posts concern one of my favourite operas, Puccini's La Fanciulla del West. In response to the first question, 'If you could play any role, what would it be?' I'm going for Minnie. Like any opera fan without an operatic voice, I have fantasies about waking up one morning and discovering I'm actually the best singer on the planet. Given the choice of voice classification, I think I'd opt for dramatic soprano (purely for the theatrical potential) and despite harbouring deep desires to sing a Tosca or a Brunhilde, I think I'd be swayed by the opportunity to mess about with guns and have a stage full of men chanting my (character's) name... 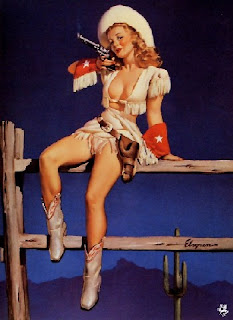 So sticking with the wild west theme, I'm going to choose Fanciulla for the next instalment of the challenge- 'Opera dream cast.' The reason for this is that.... I can't understand why Bryn Terfel has never been asked to sing/agreed to sing Jack Rance. His Scarpia proves that he's already got the unrequited love thing down, and there's no denying that he's got the voice for it (and judging by this picture, he can work the outfit..) 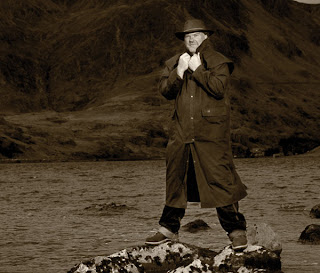 Obviously, I adore Domingo's Dick Johnson, but he's a bit older than Bryn, and I'm not sure whether I'm allowed to alter time and space for this part of the challenge. So who do you call in 2011 when you're in need of a sexy outlaw with a beautiful tenor voice? It can only be Jonas Kaufmann. Seriously, how good would it be if he added Fanciulla to his repertoire? 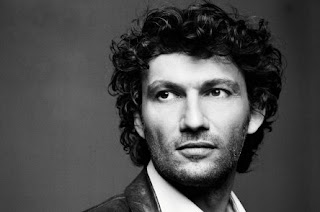 And given that I'm not likely to have my fantasy of waking up as the world's greatest dramatic soprano fulfilled, I better pick a Minnie. Sticking with the modern vibe, I think I'll go with Eva Maria Westbroek. I love her voice, and was really moved by her performances in Die Walkure and Anna Nicole this year. Eva has mentioned in interviews that Minnie is her favourite role, and I'm sure she wouldn't mind being sandwiched between Bryn and Jonas for the evening. Also, can we do the whole thing at ROH with Tony Pappano in the pit? Thanks. 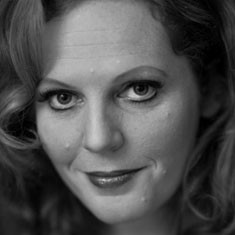 And now for some music...

opera chat
I'm a twenty-something opera obsessive from the north of England writing mostly about the productions and recitals I am lucky enough to hear and see. I experience opera through regional companies, radio broadcasts and simulcasts, but occasionally I might post about somethng a bit more glamorous... I take bad photographs to illustrate the things I blether about, but frequently they don't do this very well and I post official pictures from the websites of opera houses. I don't profit from this blog, and only use the pictures to promote the operas. Nevertheless, if you see that I've used something of yours and are unhappy, please get in touch.